The Bigfoot® Line Array, the loudest and most powerful battery powered PA ever
engineered, will debut to European audiences for the first time ever this February at
Integrated Systems Europe 2016 in Amsterdam, Netherlands, by portable sound
system manufacturer, Anchor Audio, Inc. The concept for a turnkey system of this
sound pressure level (SPL) and wattage stemmed from multiple requests from
Anchor Audio’s customer and dealer network to deliver a portable sound system
that can be heard across a football field, over military trainings, and provide a
portable sound solution for large events.

To accomplish its claims, the Bigfoot emits 130 dB and 400 Watts AC/DC of sound
through its five 20 cm neodymium woofers and one high-efficiency compression
driver, all powered by 3 rechargeable batteries. With a durable UV resistant
enclosure and two rugged, heavy-duty 20 cm wheels, the Bigfoot transports easily
and, like its namesake, can withstand tough environments. Bigfoot – as well as the
majority of Anchor’s product line – is manufactured in the USA, ships same day, and
is covered by an industry leading six-year warranty.

Bigfoot will debut to EU customers at the 2016 ISE International Tradeshow this
February at the RAI Amsterdam Convention Centre in Amsterdam, Netherlands, in
Anchor Audio’s stand #7-W170. VP of marketing, Emily Golding, will be attending
the show, along with international account managers and top Anchor Audio dealers,
and the team expects the Bigfoot debut to be as successful in Europe as it has been
in the United States. To order Bigfoot or for more information about Anchor Audio
products, contact Anchor Audio at 800.262.4671, via email at
sales@anchoraudio.com, or visit www.anchoraudio.com. 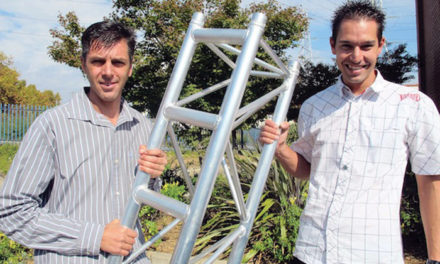