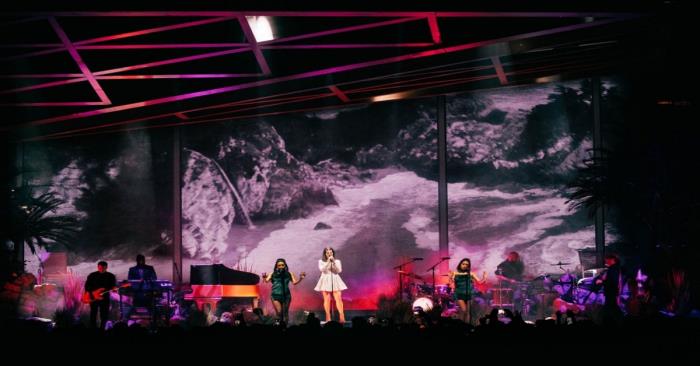 With Lana Del Rey’s most recent album, Lust for Life, prominently appearing on many critics’ top lists for 2017, the sultry singer-songwriter has been on the road in North America this January and February with “LA to the Moon,’ her first tour since 2014. FOH mixing duties for the Sound Image-reinforced trek have been in the capable care of Kevin Madigan, perhaps best known for his work with David Crosby, Graham Nash and Steven Stills. With the task of bringing Del Rey’s dreamy, intimate pop to audiences in hockey arenas and other equally acoustically challenging venues, Madigan has two secret weapons: a well-honed ear for great, vocal-based songcraft, and a passion for exceptional PAs, in this case, a DiGiCo SD5-driven L-Acoustics’ K1 system.

“We’re not trying to get huge SPLs—quality is the key, and that was taken into account with the PA choice and system design,’ Madigan notes from Orlando, Florida after surviving a month of dates mostly in the Midwest and Northeast where the temperature on opening night in Minneapolis was 26 degrees below zero.

“It is a show that’s very vocal-based. It’s all about the songs and her voice. So, keeping that in mind, I initially met with L-Acoustics’ Dave Brooks [Application Engineer, Touring Liaison] and we came up with a system design that allowed us to maintain the feel of intimacy in a large arena show. The coverage and the quality of the system make that possible, and the linear reproduction of sound everywhere really helps people to feel as if they’re quite close up. The idea that, sonically, no one ever feels far away from the stage. To achieve that, we take a lot of care and spend a good deal of time every day listening and measuring so that the sound is consistent all the way to the highest seats in the arena.’

Brooks’ design proved successful not just in the room but on the stage as well. “In addition to the L-Acoustics system delivering the best possible audio product in the audience area, it’s provided a remarkable level of consistency on stage. Some things, such as sub timing and alignment, may change a bit from day to day, but we tend not to deviate from Dave’s and my initial design. It’s our master blueprint for what we do every day.’

In touring audio, systems have gone from fairly straightforward to incredibly complex over the course of the past couple of decades, and a lot of that is about controlling where sound does and does not go. L-Acoustics pioneered the modern large-scale touring line array system with its launch of V-DOSC nearly 25 years ago, and the K1 system used on the Del Rey tour is a fitting continuation of that heritage.

“We’re using K1 for the main hangs, with K2 for down-fills and out-fills, and there are some K1-SB in there as well,’ Madigan says. The day-to-day system consists of 14 K1 over four K2 as the main L/R, with eight K1-SB flown outside of the main hangs. Also, 18 SB28 subs are ground-stacked in groups of three across the stage in a cardioid configuration.’

“I know that sounds like a really large number of subs for a show with this kind of intimate, vocal-based music,’ Madigan explains. “But while the flown K1-SB allow us to get even sub coverage through a large arena, the main use is actually about the cancellation of sound on the stage itself.’ Flying the K1-SB alongside the main K1 hangs creates a cancellation node on the stage that goes up to about 200 Hz. “So the LF intensity on the stage is much, much less, which makes things so much more comfortable for the artist. Whether you’re standing in the highest reaches of the arena or on the stage, you’re hearing different aspects of what the K1-SB are doing. Turning them on and off makes a marked difference in overall sound consistency in the room and results in a large drop in sound energy on the stage. It’s the best of all possible worlds.’

That cancellation is a huge big deal for an artist who Madigan says is “really striving to do her best every night, and this allows her to hear her best. It’s been remarkably successful.’

When his work with CSN is brought up, Madigan brings the discussion right back to Del Rey. “It certainly prepared me for this gig. CSN is kind of the ultimate training ground for mixing important vocals in music. And it stands you in good stead for about anything else. There are quite a number of musical styles represented in Lana’s music, and the audience is completely different. It’s a real pleasure to be able to be around her music and crew and take on board new things and new ways of hearing and seeing. ”

“I’m back to my regular charges after that,’ Madigan says with a chuckle. In typically humble form he still calls himself a “short-timer’ when compared to some others there, but he’s been working with the CSN folks for eight years. “It’s been an important learning ground for me, and it paid big dividends with this artist. It taught me how to treat a vocal so that it sounds good in just about any venue or situation—or any size, from small shows all the way up to the arenas we’re doing on this tour.’ 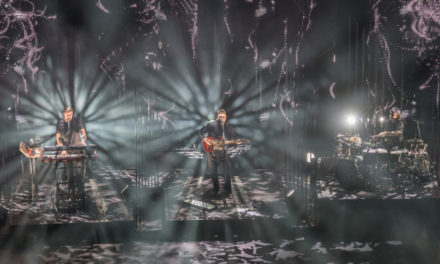 HIPPOTIZER OFFERS A BRYTE SOLUTION FOR THE 1975