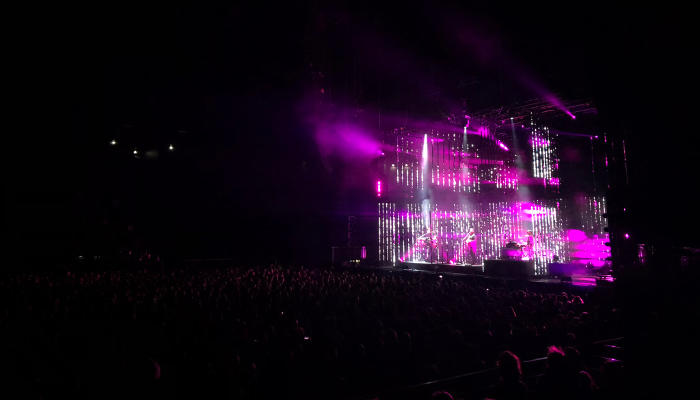 English indie rock band alt-J headed out last June on the start of their Relaxer tour in support of their latest album. They have been on the road almost continuously since, performing throughout Europe, North America and Asia through to February 2018. The band’s audio requirements are supplied by the rental arm of Rat Sound Systems, Inc, with an L Acoustics K series rig providing all-important consistency of sound for the diverse venues on tour.

Rat Sound’s association with alt J started in 2015 ,and it has been their worldwide audio supplier ever since. With a couple of years touring with the band under their belts, Front of House engineer Lance Reynolds, monitor engineer Brett Heet, systems engineer Tom Worley are fully versed in the requirements of a show that plays in vast spaces, such as the Olympiahalle Munich or Hallenstadion in Zurich and outdoor venues such as Red Rocks Amphitheater in Colorado.

“The simple answer to why we use L Acoustics is that I think it sounds the best,’ says Lance. “It has delivered a very consistent sounding show every day, and I’ve found myself using less EQ and processing with the K series speakers, compared to other systems. There always seems to be better clarity and depth, which I often find harder to get out of other speakers.’

The general system for the tour comprises main hangs of 12 K1 over six K2, with an additional six K1 and six K2 as side hangs to cover the full 180-degree audience. Cabinets can also be moved to and from the side hangs, which the Rat Sound team find useful for the varying venue configurations. Four Kara are flown as a centre fill, providing consistency and coverage directly in front of the stage for what Tom describes as the “big fans’.

Rat Sound is using KS28 subs with alt-J for the first time on this tour. They have been mostly ground stacked, with nine stacks of two KS28 at 2.5-metre intervals positioned in front of the stage, but the ability to fly them has also been taken advantage of on occasion and has delivered great results.

“The KS28 rigging has improved efficiency and the LA12X amplified controller delivers the power required for a show like this,’ explains Tom. “At Red Rocks, for example, we flew nine KS28 per side, which delivered smoother coverage in the vertical and an improved LF response from the system in the near and far field.’

“Making any system sound the same everywhere is actually a real challenge,’ says Tom. “I think the advancements in L Acoustics 3D acoustical simulation programme Soundvision, as well as LA Network Manager, the remote control system for the LA12X amplified controllers, have really helped us to achieve the consistency we want. Having the ability to drop your touring system into a saved venue space in advance and make small changes on the day makes things a lot easier and faster for me. I also have our set and lighting design drawn as 3D room data, so I can import that and check sight lines, which keeps the promoters happy.’

“Soundvision and LA Network Manager are outstanding tools,’ concurs Lance. “They’re definitely a contributing factor to why we choose L-Acoustics. Honestly, with those tools and his expertise, Tom gets it right every time.’

alt J has further dates for the tour confirmed in the US, starting this Spring. With a desire to push boundaries and take a new approach to the audio for their shows, they have confirmed a date at Forest Hills Stadium in Queens, New York, on June 15, which will feature an L ISA immersive audio system. For this special event, the entire venue will be general admission, including floor and bowl, so that fans can enjoy the show from every angle.