The entire display will be bathed in a party atmosphere as GLP’s impression brand — now a household name in the LD’s toolkit — celebrates its 10th anniversary. The complete evolution of the family, from the original impression 90 onwards, will be displayed for the benefit of nostalgists. Combining all GLP’s market-leading tools into an integrated lightshow once again will be Volt Lites’ Matthew Shimamoto, who will be hoping to emulate his award-winning stand lightshow of 2016.

Those lighting professionals looking for brand new solutions, on the other hand, will also be in for a real treat at the GLP booth. The company will be demonstrating the JDC1 hybrid strobe for the first time at LDI, which has taken North America by storm this year, having appeared on shows such as Drake, Lady Gaga, Enrique Iglesias and Pitbull, Nine Inch Nails and many more. This popular new fixture sports two fully pixel-mappable LED plates which are set either side of the strobe tube — allowing for incredible wash effects as well as bright blinding strobe effects. In combination with the motorised tilt, and 185° of motion, it is immediately obvious why this is a “must see’ attraction at LDI.

Receiving its world premiere will be the new impression S350. The fixture has been designed to meet the demands of lighting designers looking for a single, modern day “go to’ fixture that will fulfil their needs in multiple applications. With beam quality and control at its heart, the S350 features a stunning CRI index of 96, a full four-blade framing system with rotating gate – with each blade having full beam crossover, a brand new active 3D dimming software algorithm for the smoothest possible dimming, and much more wrapped up in a compact baseless unit design.

Also making its premiere will be the Force 120 fan effect fixture. Measuring just over 4.5ft square, the Force 120 is a break from the traditional moving lights from GLP. The housing contains a large diameter variable speed fan which can run at speeds as low as 30 rpm, right up to 750rpm and be able to switch from one extreme to the other at a super quick speed. Designed to create stunning scenic effects, or be used as a great air mover (or a combination of both), the Force 120 can look at home in any stage setting. Internally it features bands of LED tape which light the actual fan blades and can be controlled with differing levels of density, allowing multi-colour projection onto the blades, or to turn them into a single striking element. The Force 120 has an auto-sensing power input, sturdy construction, built-in transport wheels and multiple rigging points.

GLP will also be showing a new range of affordable Rain Covers, allowing fixtures from any manufacturer to be hung, and stay protected. The rain covers come in a variety of sizes to fit the full GLP range of fixtures, and those from other manufacturers too, giving a versatile and practical solution for any equipment owner.

Away from lighting, GLP will show the SNAP innovative cable management system, recently accoladed with a WFX award, having already collected an award at rAVe InfoComm 2017. This simple and easy to use cable management tool can be snapped to any standard 2-inch truss allowing cables of all sizes to be fed through the attached loop. GLP, who are the exclusive distributors, believe this has the potential to become an industry standard.

Cosmic Truss will demonstrate how easy it is to create clever and unique designs using their full range and just a few custom pieces, in a complete themed environment. The company will also be launching some new accessory pieces for their standard truss ranges, allowing even more flexible use of their systems.

Finally, SceneX will be showing off their range of pixel-based LED fixtures in a brand-new stand design which will demonstrate to designers a number of ways to integrate pixel lighting into set-piece environments while at the same time revealing the ease of integration that can achieve this. 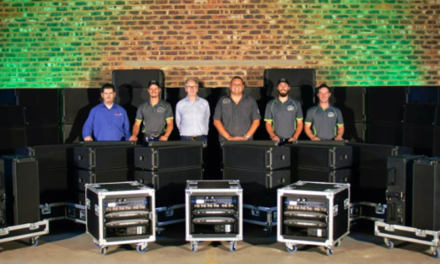 PLASA Show 2015 gets off to cracking start

Exhibitor spaces at Showlight 2017 sold out

Back to the Future